Stem Cells and Laser Saved Me From Back Surgery

Home/Posts/Blog, cell based injections/Stem Cells and Laser Saved Me From Back Surgery
Previous Next

Stem Cells and Laser Saved Me From Back Surgery

If you live with chronic pain, chances are, you’ve sought relief through multiple avenues. Perhaps you’ve undergone surgery or been prescribed pain medications. Maybe you’ve seen a chiropractor, a physical therapist, or received steroid injections with little positive effect. When it seems all your options have been exhausted, what else can you do? For Dan Maroni, who was suffering from debilitating sciatica and low back pain, regenerative medicine was the answer.

Dan, who works in sales for a major tire corporation, has always been an active man. Unfortunately, a decades-old injury and years of work-related physical demands were quickly catching up to him.

“I couldn’t sit or stand for too long, I couldn’t walk too far — everything just hurt,” he recalls. “I would have times where I would be sitting at the dinner table and my back would spasm. It was so severe I would have to scoot off the chair and get down on my knees on the floor just to get up from the dinner table. It was controlling my life to the point where I was in pain all the time.”

To help manage his pain, Dan turned to chiropractic treatments, acupuncture, stimulation devices, and steroid injections — all with little effect. Desperate for relief, he finally sought the opinion of a surgeon. “When I met with the surgeon, I found out there were four discs in my back causing the problem. He said the only way to fix that was fusion surgery,” he adds. “I didn’t like that idea at all.”

In a final attempt to avoid surgery, Dan began conducting his own research into the science behind stem cell therapy. Intrigued, he then attended an informational seminar presented by RestoraLife Regenerative Care. “The presentation really lined up with my own research,” he states. “I knew it wasn’t going to be a quick fix, but after my very first treatment, I already began to notice some relief.”

Fast forward to today, and Dan is finally back to enjoying the activities he loves, pain-free. His treatment, which included stem cells and platelet-rich plasma, helps the body to rebuild damaged and deteriorating tissues that are often the source of many types of chronic pain. In addition to stem cell injections, Dan also received deep tissue laser therapy, a technique successfully utilized by the caring and knowledgeable staff at RestoraLife.

“I felt that the laser treatments were very effective in helping to reduce my pain,” he recalls. “Every time I came in for a treatment, I felt more relief. I would say within a few weeks after the injections, I had already realized at least 30-40 percent less pain, and I know that was from the laser.”

“My wife loves me more than she ever did because I’m not grouchy anymore!” he jokes. “I might not have realized it, but I know I was short-tempered at times — I didn’t mean to be, but I was in constant pain. When you’re in that kind of pain, you’re not the same person.”

“I’m doing so much more now than I would even think of doing before,” he reports. “I can work outside all day now and my back doesn’t bother me one bit. This has helped me like nothing else has ever helped me.”

“I have recommended RestoraLife to many, many people,” Dan says. “To me, this is the best alternative to anything I could ever think of. I’m just so glad I did it — I can’t stop saying it — and I’m going to do it again. I have osteoarthritis in my knees and I’m convinced that these treatments are the way to go.”

The road of life can be painful, but it doesn’t have to be. 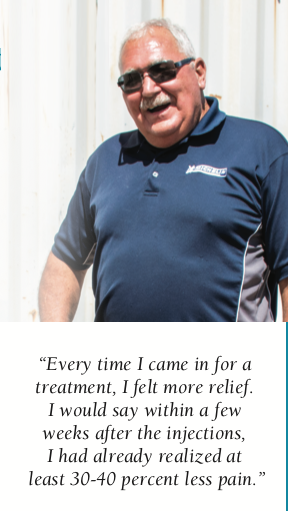 Contact us to see how we can help YOU avoid surgery!